Investment in fuel ethanol distilleries has soared since the late 2005 oil price hikes, but data collection in this fast-changing sector has fallen behind. Because of inadequate data collection on the number of new plants under construction, the quantity of grain that will be needed for fuel ethanol distilleries has been vastly understated. Farmers, feeders, food processors, ethanol investors, and grain-importing countries are basing decisions on incomplete data. The U.S. Department of Agriculture (USDA) projects that distilleries will require only 60 million tons of corn from the 2008 harvest. But here at the Earth Policy Institute (EPI), we estimate that distilleries will need 139 million tons -- more than twice as much. If the EPI estimate is at all close to the mark, the emerging competition between cars and people for grain will likely drive world grain prices to levels never seen before. The key questions are: How high will grain prices rise? When will the crunch come? And what will be the worldwide effect of rising food prices? One reason for the low USDA projection is that it was released in February 2006, well before the effect of surging oil prices on investment in fuel ethanol distilleries was fully apparent. Beyond this, USDA relies heavily on the Renewable Fuels Association (RFA), a trade group, for data on ethanol distilleries under construction, but the RFA data have lagged behind movement in the industry. We drew on four firms that collect and publish data on U.S. ethanol distilleries under construction. RFA is the one most frequently cited. The other three firms are Europe-based F.O. Licht, the publisher of World Ethanol and Biofuels Report; BBI International, which publishes Ethanol Producer Magazine; and the American Coalition for Ethanol (ACE), publisher of Ethanol Today. Unfortunately, the lists of plants under construction maintained by RFA, BBI, and ACE are not complete. Each contains some plants that are not on the other lists. Drawing on these three lists and on biweekly reports from F.O. Licht, EPI has compiled a more complete master list. For example, while we show 79 plants under construction, RFA lists 62 plants. (We welcome any information that will improve this list, which can be viewed at www.earthpolicy.org/Updates/2007/Update63_data.htm.) According to the EPI compilation, the 116 plants in production on December 31, 2006, were using 53 million tons of grain per year, while the 79 plants under construction -- mostly larger facilities -- will use 51 million tons of grain when they come online. Expansions of 11 existing plants will use another 8 million tons of grain (1 ton of corn = 39.4 bushels = 110 gallons of ethanol). 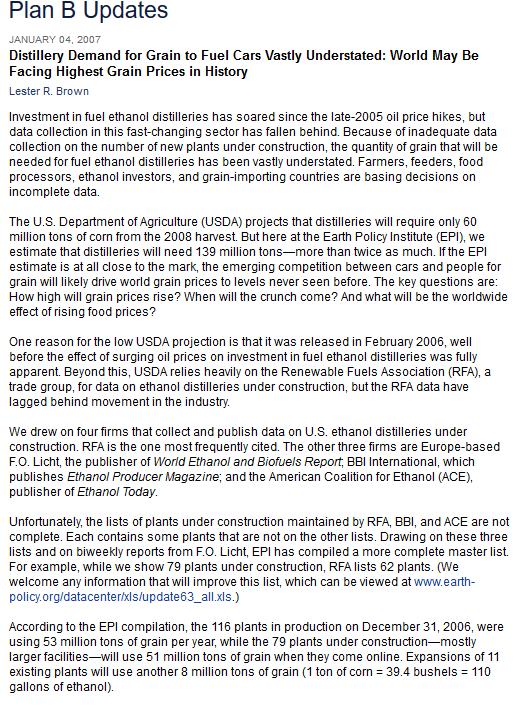