Between 2013 and 2015, a large part of the western United States, including the Central Valley of California, sustained an extreme drought. The Central Valley is recognized as a region of hemispheric importance for waterbirds, which use flooded agriculture and wetlands as habitat. Thus, the impact of drought on the distribution of surface water needed to be assessed to understand the effects on waterbird habitat availability.

We used remote sensing data to quantify the impact of the recent extreme drought on the timing and extent of waterbird habitat during the non-breeding season (July-May) by examining open water in agriculture (rice, corn, and other crops) and managed wetlands across the Central Valley. We assessed the influence of habitat incentive programs, particularly The Nature Conservancy's BirdReturns and The Natural Resources Conservation Service's Waterbird Habitat Enhancement Program (WHEP), at offsetting habitat loss related to drought.

Overall, we found statistically significant declines in open water in post-harvest agriculture (45-80% declines) and in managed wetlands (39-60% declines) during the 2013-2015 drought compared to non-drought years during the period of 2000-2011. Crops associated with the San Joaquin Basin, specifically corn, as well as wetlands in that part of the Central Valley exhibited larger reductions in open water than rice and wetlands in the Sacramento Valley. Semi-permanent wetlands on protected lands had significantly lower (39-49%) open water in the drought years than those on non-protected lands while seasonal wetlands on protected lands had higher amounts of open water. A large fraction of the daily open water in rice during certain times of the year, particularly in the fall for BirdReturns (61%) and the winter for WHEP (100%), may have been provided through incentive programs which underscores the contribution of these programs. However, further assessment is needed to know how much the incentive programs directly offset the impact of drought in post-harvest rice by influencing water management or simply supplemented funding for activities that might have been done regardless.

Our landscape analysis documents the significant impacts of the recent extreme drought on freshwater wetland habitats in the Central Valley, the benefits of incentive programs, and the value of using satellite data to track surface water and waterbird habitats. More research is needed to understand subsequent impacts on the freshwater dependent species that rely on these systems and how incentive programs can most strategically support vulnerable species during future extreme drought. 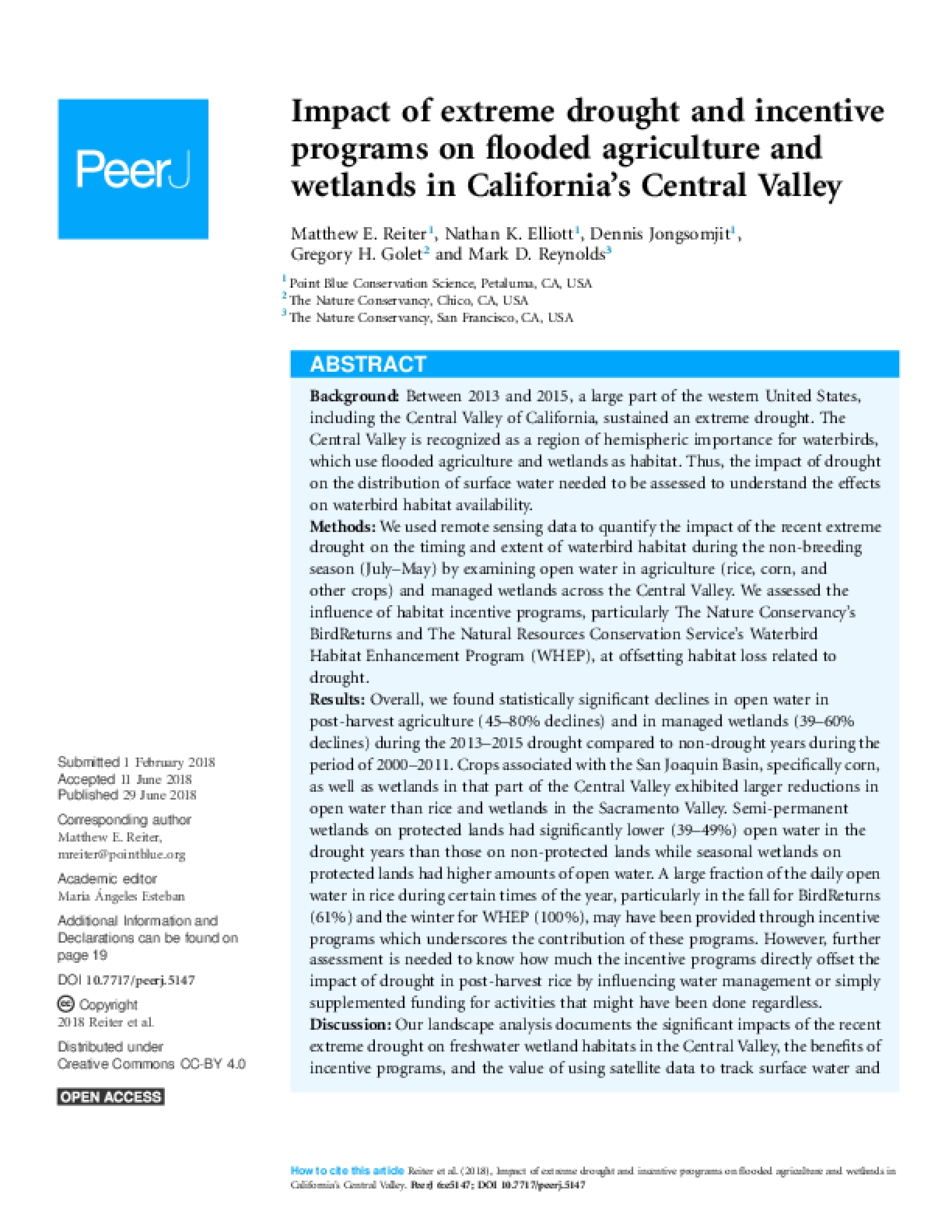