Regulation of Health Plan Provider Networks: Narrow Networks Have Changed Considerably under the Affordable Care Act, but the Trajectory of Regulation Remains Unclear

Health insurance plans with limited networks of providers are common on the Affordable Care Act's (ACA's) health insurance Marketplaces. Recent studies have found that these "narrow network" plans constituted nearly half of all Marketplace offerings in the first two years of coverage, with one analysis concluding that about 90 percent of all consumers had the option of buying such a plan if they chose.

Plans with limited networks are not new and are not confined to the Marketplaces. Yet there is reason to believe that they have grown in prevalence partly because of the ACA. Many of the health law's consumer protections--prohibitions on health status underwriting, increased standardization of benefits, a maximum limit on out-of-pocket spending, and the elimination of annual and lifetime limits on benefits, for example--have foreclosed traditional strategies used by insurers to keep costs in check. Meanwhile, other elements of reform, including online Marketplaces that make it easier for consumers to compare plans based on premiums and a financial assistance framework that links the amount of a person's premium tax credit to the cost of the second cheapest plan available to them at the silver metal tier, explicitly encourage insurers to compete on price. These developments appear to have led many insurers to design Marketplace health plans that combined a comparatively low premium with a more restricted choice of providers.

Limited network plans might offer value to consumers. Coverage that pairs a low premium with a network that provides meaningful access to health care might meet the needs of many enrollees, no matter the network's overall size. Negotiations between insurers and providers over network participation might encourage more efficient delivery of care. And the power to contract selectively might allow insurers to create networks comprising a subset of providers who meet raised standards of quality, potentially resulting in higher-value care.

But these plans also pose risks. A network can be too narrow, jeopardizing the ability of consumers to obtain needed services in a timely manner. This can happen if the network contains an inadequate mix of provider types. For example, a recent examination by Harvard researchers of the network composition of health plans offered on the federal Marketplace during 2015 found that nearly 15 percent of the sampled plans lacked in-network physicians for at least one specialty. Or a network might have an insufficient number of providers: There might be too few physicians who are taking new patients, who are available for an appointment within a reasonable time, or who speak the same language as the enrollee. Certain network limitations also might have the effect of discouraging enrollment by sicker consumers, potentially skewing the risk pool. Plans that provide limited or inadequate access to in-network providers make it more likely that enrollees will obtain care from out-of-network sources, exposing them to significant expenses and the possibility of surprise medical bills.

Surveys show that many consumers are open to trading network breadth for a lower premium. They also suggest that, in practice, large numbers of consumers do not find network designs to be transparent. If the features of a plan's network are inadequately explained or its list of participating providers is inaccurate, it might be impossible for consumers to make an informed decision about whether the plan's combination of network and price is right for them.

Consumers' experiences with narrow network plans since the ACA's implementation have defied easy characterization. Surveys of the insured, including those with Marketplace coverage, suggest that the vast majority are satisfied with their plan's choice of doctors. Yet anecdotal complaints about networks have proliferated, and the exclusion by some health plans of high-profile hospitals and care facilities has generated media headlines.

In light of these developments, and as part of a larger effort to keep pace with changes to the health insurance markets since passage of the ACA, lawmakers and regulators have devoted significant attention to determining how networks should be regulated to ensure they are adequate and transparent. This work has involved efforts to establish or update standards for evaluating the sufficiency of a plan's network, improve the accuracy of provider directories, and protect enrollees from surprise bills from out-of-network providers. This brief offers an overview of state and federal actions that address the first two categories--network standards and provider directories--with a focus on rules that govern plans sold on the ACA's health insurance Marketplaces. 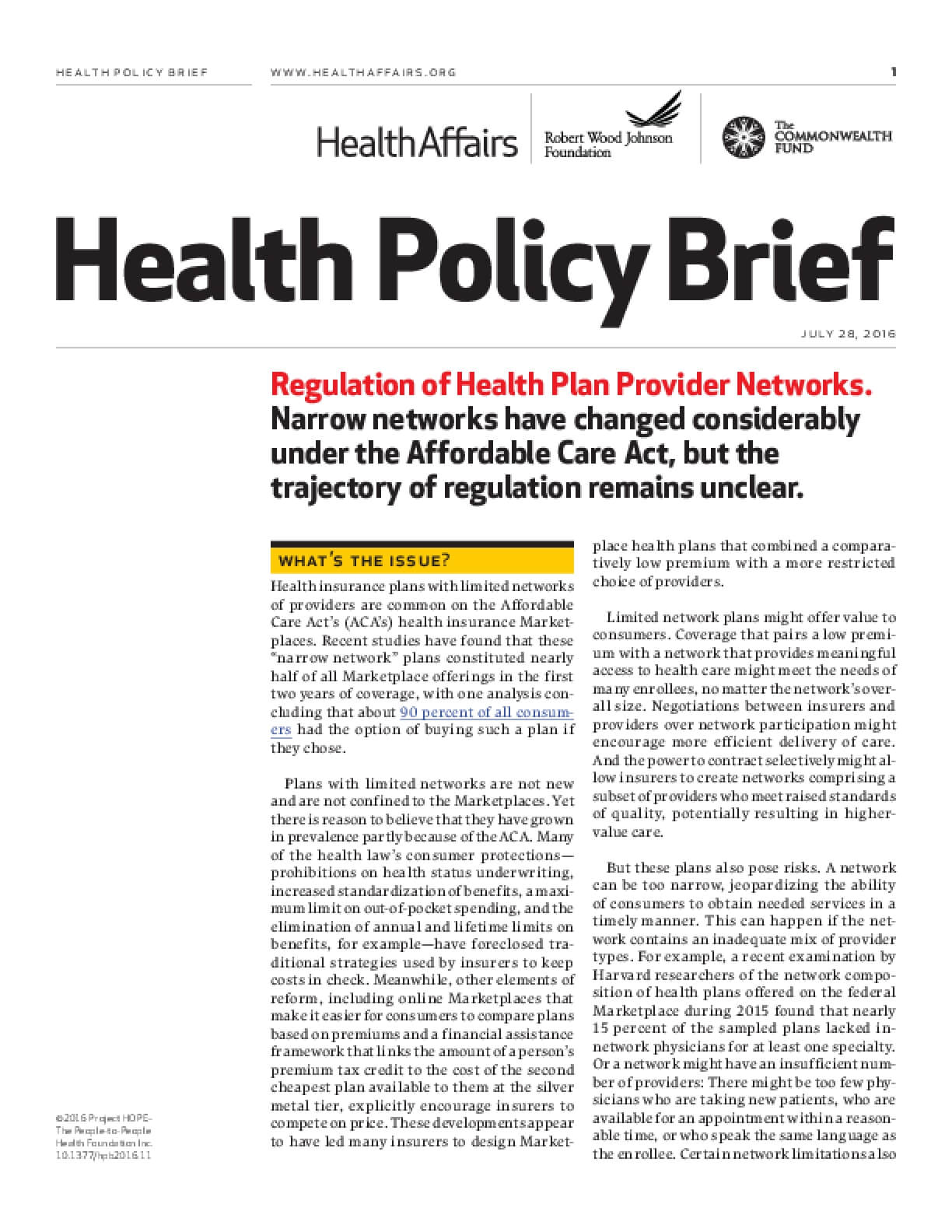